Last May I was invited to speak at several schools in Westchester County, NY.  Since we were so close to NY City, my wife and I decided to extend our trip by staying four additional days in the city. It was fun taking in Broadway plays, dining at terrific restaurants, and seeing the sites of New York. One play that we attended, The Cripple of Inishmaan, starred Daniel Radcliffe and Sarah Greene, who was nominated for a Tony for her performance. Greene and Radcliffe were amazing in the production–both funny and touching.

Though I’m normally not an autograph seeker, my daughter is such a huge fan of Harry Potter that I thought she might appreciate a Daniel Radcliffe autograph. I didn’t know how approachable Radcliffe would be, but I bought a copy of the first Harry Potter novel just in case, and I waited in line after the play was over. Not only was Radcliffe generous enough to sign autographs, but he also posed for selfies and was a kind and welcoming fellow. Here are some photos of him signing. That’s Times Square in the background. (Incidentally, though my daughter is all grown up these days–she’s a partner in a law firm  and has two children of her own–she squealed with childish delight when she received the autographed  book for her birthday.) 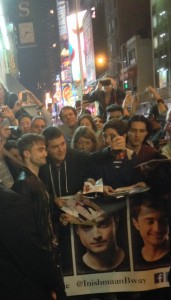 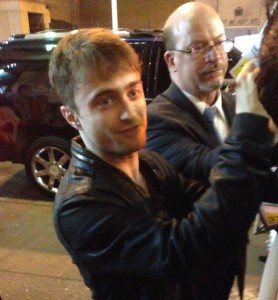